Revenue from freemium apps shoots up Some truly doubted that freemium would ever make it in the cutthroat world of apps. However, the model has proven very successful for developers, both on iOS and Android. AppAnnie tracks more than 700,000 applications, and has found out that revenue from freemium iOS apps has increased four times for the last two years, while just in 2012 that same revenue for devs in the Play Store is up 3.5 times.

Meanwhile the income from paid apps has stagnated on both platforms. Top apps on them are increasingly moving to the freemium model, and the prediction is that by 2015 revenue from it will top $5.6 billion, a full 64% of the total take-home from apps.

Freemium is not suited for every app, of course, yet the trend is to move towards no upfront costs for installing an application on your phone or tablet. 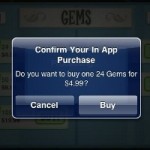