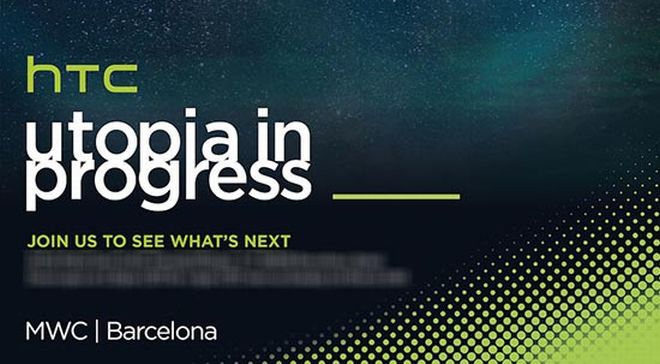 HTC sends out invites to a big press event

Rumors circulating in the tech world suggest that HTC will unveil the successor to the HTC One M8 at the Mobile World Congress in early March. Now this seems to be quite likely especially after the new information we got yesterday. HTC has sent out invitation to the press for a special press conference on March 1st, or just hours before the official start of the MWC.

Some specialists were expecting a flagship smartphone at CES in Las Vegas but HTC only presented a new Desire phone – 826. The real flagship, the rumored HTC Hima, should be presented in less than two months’ time, and the congress in Barcelona looks like an ideal place for that to happen.

The invitation says: “HTC Utopia in Progress, Join us to see what’s next at 4 PM CET”, and shows a night sky with stars and one star much brighter than the rest. This new star should be the One M8 successor, HTC One M9 (or Hima).

The future high-end smartphone codenamed HIMA is rumored to have a 5-inch Full HD screen, Snapdragon 810 processor with eight cores, 3 Gigs of RAM, 2840 mAH battery. Significant improvements will be made in the camera department – the phone may have a 20.7MP main shooter and a 13MP (or 4MP UltraPixel) front-facing camera. The new phone will come with similar dimensions to its predecessor – 144.3 x 69.4 x 9.56 mm, and similar color variants. If the March 1 event reveals us the Hima, the phone may go on sale on the same date, just like the One (M8) did in 2014.