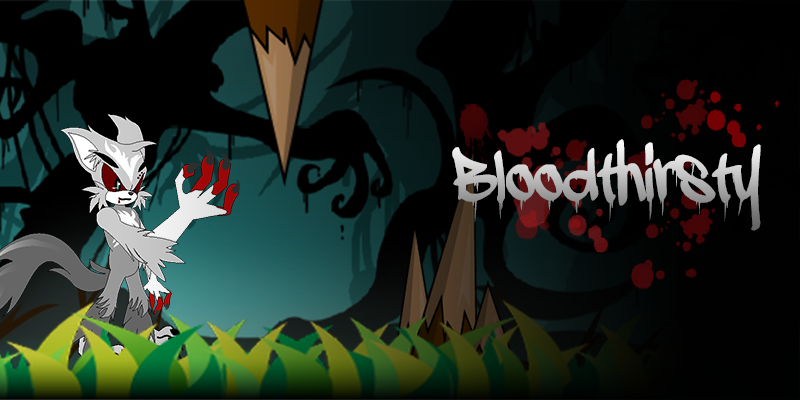 Bloodthirsty is an infinite side-scroller mobile game , currently available only for Android.The game is based on cooldown-synchronization of abilities ,as the most important thing of the game is to survive and achieve highest scores. Help Jacob the werewolf survive in the Haunted Forrest and defeat Fairies , Golems , Ghosts and Warriors in order to achieve highscores ! Your character , Jacob the werewolf was inspired from the series of games & animations “Sonic The Hedgehog”.
At the first view , the gameplay is hard. You have to learn the mechanics of the game before you can really achieve highscores. The gameplay is infinite, like the very popular “FlappyBird” , but is also more complex. The complexity of the game is represented by the three main abilties :

All abilities should be used very carefully and at the right moment (preferably when you have no escape) , because the attacks have cooldowns (claw attack 4 seconds , Bite attack 8 seconds) so when you have no ability left , your only chance of survival will be jumping over enemies , which is not so easy !
The bar at the top of the screen is called the BloodMeter , and it increases as you kill more enemies. When the BloodMeter is full , you achieve “BloodLust” . The Bloodlust increases speed, spawns a Special Coin and gives you more points !

Now , the Special Coin ! The special coin is giving three extra things randomly. The first is “Slow Down” , which does what it says , slows the game down a bit so you can avoid enemies easier. The second is “Remove Enemies” which , as you upgrade it from the shop , removes enemies from the waves so you can live longer. And the third is “Guardian Angel” which is the most amazing , as it grants you invulnerability for a lot of time ! In all this time , you can’t die , and that rocks !

Also , there is the possibility to collect coins ! Coins can be bought from the shop with real money , but also can be collected and exchanged for diamonds. 1 Diamond equals 250 coins. So there’s no need to pay in this game. With coins you can upgrade your abilities in order to reduce their cooldowns ,increase Guardian Angel duration,and your other extra abilities , which is a very cool thing.
The game has Google Play Services implemented , so you can unlock a lot of achievements and post your highscore on a global leaderboard!

I hope you will enjoy this game . It was developed & designed by a single person , Savin Mircea , as it’s first mobile game, so don’t be too criticizing 😀 . The game is still under development , and future versions will bring HD Graphics for high-resolution devices and a lot of new improvements !

Here’s the link to the game on Google Play