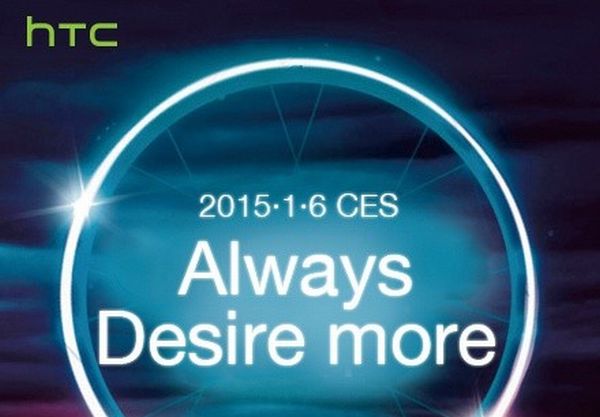 At a press conference on January 6 at the Consumer Electronics Show in Las Vegas HTC will unveil new Desire smartphones. A new teaser for the event says “Always Desire More” and the date is set for 1/6/2015. That means the upcoming flagship, dubbed HTC Hima, is not likely to be seen at CES and we will see one or more Desire smartphone instead. In another render posted a few days ago we can see a camera centric smartphone and hints for a colorful design and removable shells. There is no other information about the upcoming HTC Desire smartphones but luckily we have just 6 days to the press conference to learn more.

The 2015 flagship by HTC codenamed HIMA could be unveiled at a separate event later in Q1 or at the Mobile World Congress in March. Most of the specs of the Hima have already leaked from AnTuTu benchmark and we know it is a 5-inch smartphone with a 1980 x 1200p resolution.  As expected, the Hima will employ a last-gen Snapdragon 810 processor supported by 3 GB of RAM. Other interesting parts are the 20.7 MP rear camera and the 13MP front facing camera, so HTC is finally dropping the controversial UltraPixel sensor for its flagship. HTC One M8 for Android and Windows had a 4MP camera with larger than normal pixels for better low-light performance but the effect was not as expected and the quality was average.

HTC’s event at CES 2015 could give us even more interesting news, but for now the most anticipated device remains the HTC One M9 or Hima, even though a nice Desire phone will be welcomed too.